Ten Things to do in Hong Kong, #7A

“Visit what?” you ask. Well, not the usual tourist traps but rather the outlying islands, 221 of which are uninhabited and a number of which are barely inhabited.

I’ll start with the three most popular and then talk about the others in a subsequent posting.

Lantau is the largest island in the territory and the most visited. It is the home of Chek Lap Kok Airport, Disneyland, Po Lin Monastery and its 110 foot high sitting Buddha, the soon to be opened Ngong Ping 360 Cable Car Ride, Tai O with it’s stilt housing and Discovery Bay, an expat dominated enclave. But don’t think it doesn’t have its secret places where you are unlikely to run into many other tourists. 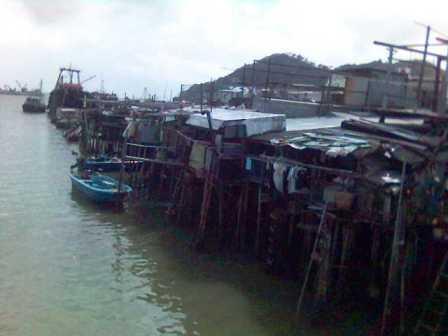 Over 50% of the Island is National park with many trails and free overnight camping sites. There is a Trappist Monastery that was established in the 19th century. The only way to get there is to hike as it is halfway between Mui Wo and Discovery Bay. There is Tung Chung Fort, built in 1817 to combat piracy and smuggling. It’s been recently (1998) refurbished. There is a maritime park north of the island where you can try and catch a glimpse of Hong Kong’s famous “pink” dolphins by renting a boat at Tai O.

There are beaches that are often almost completely empty especially on week days; particularly Pui O’s shell-lined beach four miles west of Mui Wo where, at dusk, you can see water buffalo cooling off in the surf after a hard day’s work in the nearby rice fields. Just walking the streets of Mui Wo and snacking at one of the open-air hawker stands are worthwhile activities and are not seen as “tourist” attractions.

Most people who visit Hong Kong more than once end up taking a chartered junk to Sok Ku Wan on Lamma Island for seafood. There are more adventurous and more interesting ways to get to and explore the island. It is known as a very laid back “hippie” hang out but as everywhere else in Hong Kong it is the Chinese who run things.

For your first visit I recommend taking the ferry to Yung Shue Wan, on the western side of Lamma, which is the largest town on the island. Wander around the village, it is a very quirky place with narrow lanes that eliminate the possibility of automobiles disturbing the peace. There is a paved path that leads through the village past undeveloped sandy coves and palm tree groves where you can rest before climbing up the peak that separates the western shore from the eastern shore. At the apex you’ll be rewarded with spectacular vistas of the South China Sea and many other islands.

You then descend to Sok Ku Wan with its more than a dozen seaside restaurants, many built on stilts out over the water. You know the fish are fresh because you can see them swimming in fish tanks just before they are pulled out and cooked to order.

After eating, you can grab a small water taxi to Aberdeen. It wends its way through the dozens of fish and prawn farms and makes a couple stops before heading to Aberdeen Harbor with its hundreds of live-aboard fishing boats. A lot cheaper than a tour and a lot more adventurous and fun.

Cheung Chau is the least well-known of th “Big Three.” With few expat residents and no western restaurants, Cheung Chau is as close as you can come to the Hong Kong that existed 50 or 60 years ago. Lots of incense sticks burning in the temples, parks filled with card games, the clatter of mah-jongg tiles from the rear of shops or houses opened up to try to catch a stray breeze and people chatting and perhaps gossiping with one another.

The island is relatively densely populated with more than 20,000 residents but it still has its private places which you can access if you choose to circumnavigate the island, an activity I recommend. The narrow streets of the major village are lined with traditional butcher shops featuring recently butchered pigs and soon to be butchered live chickens, cheap dai pai dongs (noodle stalls) soon to be extinct if the government has its way, Chinese apothecaries offering herbs and remedies and the older people sitting on benches keeping an eye on the youngsters left in their care. It’s far less idyllic on weekends, when the population doubles, so plan a week day visit if you can.

There are inexpensive guest houses near the many beaches. Wind-surfing is very popular here and Hong Kong’s only Olympic Gold Medal winner San-san was raised on Cheng Chau. There are also dozens of seafood restaurants on the waterfront promenade, that rival the Lamma ones in everything but size.

If you can arrange it, attend the annual Bun Festival sometime in Late April or early May. It will blow your mind. Villagers offer thousands of steamed lotus-paste buns to the god Pak Tai, by covering a 50 foot tall tower with the buns. At the festival’s climax, local young people scramble up the structure in a contest to see who can capture the top-most bun. The race to the top was banned for a while because previously one of the bamboo towers collapsed. But now, using a metal tower, the practise has been re-instated.

Each and all of these three islands are worth at least a day-trip. Take the opportunity to leave the crowds of Hong Kong Island and Kowloon behind and take in some sights and activities most tourists never see.