I’m not talking about dining at your hotel or at the over-priced tourist traps or eating Western fast food or pub food to accompany your beers. I’m talking about eating the same kind of food the locals do.

I’ve written a number of postings about restaurants in Hong Kong but I’ve not really covered local, inexpensive Cantonese cuisine. I am certainly not an expert but after fourteen years, I’ve picked up some rules of thumb. One thing I know for sure: food is very important to Hong Kong people. The normal person to person greeting isn’t, “How are you?” but rather, “Have you eaten yet?” (Actually, “Have you had your rice, yet?”)

If I just want steamed rice (bah fahn) or noodles (bah mien), chicken or duck and some steamed veggies, I go to any food stand and point. These food stands are everywhere, and I include the hole-in-the-wall indoor places also. If I want my rice or noodles fried I ask for chow fahn or chow mien. If I want my fish, duck or chicken in soup I point to the vat of broth that is always being kept hot. I’m embarrassed to say that my Cantonese is almost non-existent. It’s easier to point at what I want.

Another favorite place of mine for Chinese fast food is the food floor at any wet market. You can order from the pans of food that are already prepared or they will cook stuff to order if you can communicate what you want. Often there is one person around who speaks enough English that you can communicate your needs and of course there is always pointing. There are two Chinese fast food chains I avoid, Cafe de Coral and Fairview. I find the food is just not as fresh or flavorful as at the wet markets.

Then there is of course Dim Sum. Many restaurants serve dim sum but my two favorites are the Luk Yu Tea House at 24-26 Stanley St. in Central. I like it as much for the ambiance and surly waiters as I do for the dim sum. My other favorite is at 63 Sing Woo Rd. in Happy Valley (I lived in Happy Valley for nine years) and is simply called Dim Sum House. 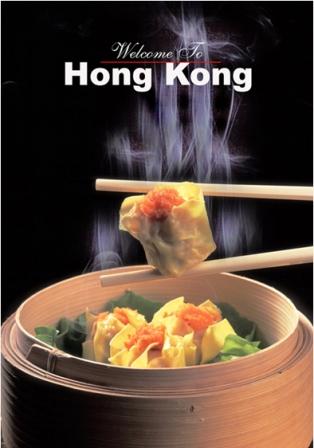 The locals often frequent what they refer to as Yum Cha restaurants. They are somewhat like diners in the U.S. in that they serve a wide variety of dishes all day long. I’ve eaten in some good ones and some horrible ones. I generally depend on my Hong Kong informants for advice. You will want to do the same even if your informant is the concierge at your hotel.

I have avoided talking about Hong Kong seafood restaurants because they are difficult to patronize unless you have at least four people. They are also almost always packed on Sundays when extended families have dinner together. I know this sounds wierd but I have never had a bad meal at one of the large seafood restaurants here. They are a vanishing breed because of rising rents and competition from Western eateries but there are still lots of them around and I have never had fish prepared better than in one of these monstrous places. I particularly recommend the steamed garoupa (grouper). you can pick out your choice, happily swimming one minute, in a steamer the next minute and at your table five minutes later. Don’t be put off at the noise as people yell at each other across a table seating 10-14 people but rather enjoy the family interplay and a peek into Cantonese culture.