Getting from Hong Kong to Taipei 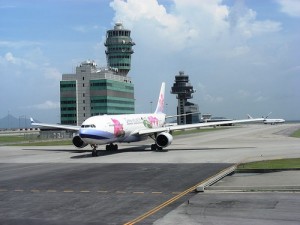 Taipei is the capital of Taiwan, an island nation located off the coast of southeastern mainland China. Taipei has often been skipped as travel destination in favor of the more popular rivals, such as Hong Kong and Tokyo, but lately more and more travelers add Taipei to their itinerary. It offers a variety of landmarks, museums , parks and temples to visit.

Taiwan is an island and the only possible way for travelers to get between Hong Kong and Taipei is by plane. There isn’t any passenger ferry route available (the China Sea isn’t exactly a pleasure to deal with).

Taipei is served by Taiwan Taoyuan International Airport (TPE) , a hub for China Airlines, EVA Air and TransAsia Airways. The airport is connected to the city by express buses and high speed rail.

Flights between Hong Kong and Taipei are operated by Cathay Pacific, China Airlines, Dragonair and EVA Air. The flight time is about 1h 35 min. Non-stop single flights start at HKD 2214 / US$285 on EVA Air in February and March 2012. By April 2012 expect to pay from HDK 2649 / US$341 on EVA Air. For certain times of the year (i.e Feb, Mar) it might be slightly cheaper to choose a connecting flight on JetStar Airways.