Getting from Hong Kong to Shanghai (and return) 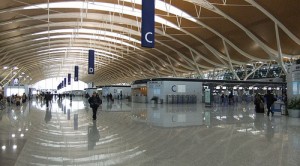 Shanghai is the largest city in China and is one of the most developed countries on the mainland. The city mixes the East with the West, featuring Chinese traditional buildings with European flair. It is one of the main travel hubs in China, which makes getting to and from here is not very hard.

Many travelers who visit Hong Kong also plan to travel to Shanghai. Since the distance between the two cites is over 1200 km (764 miles), it makes sense to find a cheap and efficient way to travel.

Traveling by train will save some money, as it’s slightly cheaper than flying. However, you’ll be spending 20 hours traveling. Flights take less than 2 ½ hours and you’ll spend more time going through Customs but they are a good choice if you have limited vacation time on your hands.

Hong Kong International Airport (HKG) is an important gateway into mainland China. It is a focus city for many airlines. It is also hub for Air Hong Kong, Cathay Pacific, Dragonair and Hong Kong Airlines.

Slightly cheaper tickets (from HK$1420/US$182 single adult) can be booked via local booking websites on both China Eastern Airlines and Shanghai Airlines.

Trains from Hong Kong to Shanghai

Trains depart from Hong Kong’s Hung Hom station in Kowloon and arrive at Shanghai Railway Station, the largest and oldest train station in the city. The journey take about 20 hours. Trains from Hong Kong to Shanghai run on an odd/even days schedule. Practically, there are trains every other day, either on odd or even days. Trains depart on odd days in January, April, May and August; the even days months are: February, March, June and July. The train departs at 3:15 p.m.

The train becomes very crowded especially during peak holidays time. So make sure to book your ticket ahead of time. Single adult fares range from HK$508 / US$65 (hard sleeper) to HK$ 1,039 / US$135 (deluxe soft sleeper). On the return journey, the tickets are slightly from expensive (US$62 to US$155, depending on the type of sleeper). All trains have AC. Details can be found on the MTR website .