Getting from Hong Kong to Guangzhou (and return) 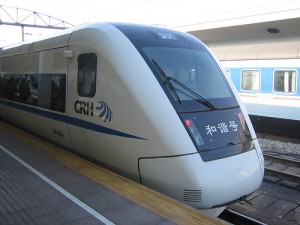 Hong Kong is an interesting place, combining the best things of the Chinese and British worlds which have influenced it over the years. It is also a major travel destination in China and an important hub in the area.

Guangzhou is located in Southern China and is the third largest city in mainland China. It is known for the famous cuisine and is also an excellent destination if you plan to do some shopping.

When it comes to getting from Hong Kong to Guangzhou, forget flying. The high speed trains, the ferries and the buses offer excellent rates and get you between the two places in no time.

New Guangzhou Baiyun International Airport (CAN) is the main hub of China Southern Airlines and a focus city for Shenzhen Airlines. It is China’s second busiest airport.

Trains from Hong Kong to Guangzhou

The distance (by railway) between Hong Kong and Guangzhou is 182 km and is covered in about two hours. Trains depart from Hung Hom railway station in Kowloon and arrive at the East station in Tian He district. The single adult ticket starts at HK$190 (about US$25) and the service is run by Hong Kong MTR. There are 12 trains a day and the first one departs at 7:25 a.m.

You can also travel by fast train from Shenzhen (which is right across the border from Hong Kong and connected to Hong Kong by a bridge which you can cover on foot). The single adult ticket starts at US$3. There are up to 24 trains per day and the first one departs at 3:20 a.m. The travel time is almost an hour.

Buses from Hong Kong to Guangzhou

There are buses which connect Hong Kong International Airport to Guangzhou. There are departures every 30 minutes, from 7:30 a.m. to 10 p.m. The single adult fare is US$70.

You can also take the bus from Hong Kong Downtown to Guangzhou. There are four boarding points at HK Island, four at Kowloon and three at New Tertitories. The first bus leaves at 7:20 a.m. from Causeway Bay Metropark Hotel on HK Island. The last bus leaves at 5:20 p.m. The single adult fare starts at HK$80 (about US$10).

Ferries from Hong Kong to Guangzhou

You can take a ferry from Hong Kong and get to New Nansha Port in Guangzhou. The ferry terminal is far from the city center but there are public buses which can take you to the center. The ferry ride is 75 minutes and the single adult fare starts at HK$147 (about US$20). The first departure is at 8 a.m. and the last at 3:30 a.m.