Getting from Hong Kong to Bangkok (and return) 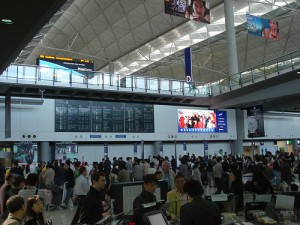 Bangkok ,the capital of Thailand, is a major transportation hub in Asia and an excellent base for your explorations in the area. It’s often best to travel from other major cities in Asia to Bangkok and then plan to continue your journey from here.

Hong Kong is an interesting place, as a result of being under both Chinese and English influences. Today it’s a major travel destination in China and an important hub in the area.

Unless you have a lot of time on your hands and your only reason to travel by land is to see the scenery along the way, your best bet is to book a direct flight from Hong Kong to Bangkok. Single adult fares start at US$110.

According to a large booking engine (Kayak), the cheapest single adult ticket is US$114 on Thai AirAsia. The return adult fare starts at US$224. The flight time is 2h 50 min (one way). Prices are similar if you book directly via the airline’s website; single adult fares start at 859.00 HKD (or about US$110).

Trains, buses and ferries from Hong Kong to Bangkok

If you plan to travel by land or sea, you are in for a long adventure (literally).
Hong Kong is an hour away from Macau, by hydrofoil and you get to mainland China, as well. Once in mainland China you need to take another means of transport to get to Bangkok. Practically, you’ll be traveling through four countries (China, Vietnam, Laos and Thailand) or in short, a logistical nightmare. You can also take the bus to Shenzhen, on mainland China. There are also trains from Hong Kong to mainland China, including to Beijing and Shanghai.

A possible route is Hong Kong to mainland China (Beijing) by train, then another train to Hanoi (Vietnam). From there, take the bus Hanoi to Vientiane (Laos). Cross the border into Thailand and then take the train from Nong Khai to Bangkok.