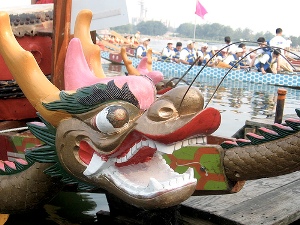 Tuen Ng Festival or the Dragon Boat Festival is a traditional Chinese festival held each year on the fifth day of the fifth month on the Chinese calendar. In western date, that would be June 8 in 2008.

There are many findings about the origin of the festival. Legend has it that the patriotic scholar-statesman Chu Yuan committed suicide (by drowning) to protest against the emperor. People respected Chu Yuan and when they heard that he had drowned, they jumped on boats to search for him. As they failed to find him, they started to hit the drums and make a lot of noise to scare the fish so that they won’t eat Chu Yuan. Also they tossed cooked rice in the river so that the fish won’t eat the poor man’s body. They started to wrap the cooked rice in bamboo leaves which evolved in today’s rice dumplings.

During the West Tsin dynasty, it became popular to eat rice dumplings during the Dragon Boat Festival

Beside the day of the festival, the fifth month of the Chinese calendar is considered an unlucky month. People believed that illness and disasters are common during this month. Obviously that opened the road for superstitions. Today, most families hang calamus and Artemisia above the doors to get rid of the misfortune.

Dragon boat races were first held in 1976 and now have become a really exciting annual event. Between 9 AM and 5 PM on June 14 and 15, 2008 you can watch the main dragon boat races on Shing Mun River, at Sha Tin in the New Territories.